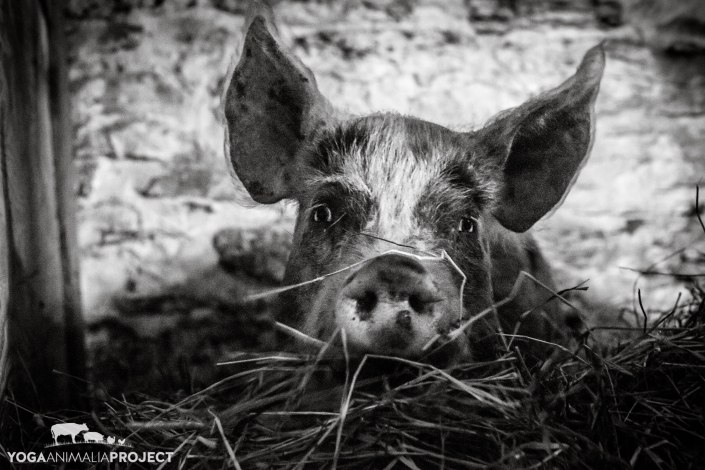 A Hail Mary Pass, they are calling it.

A last-ditch effort, but instead of a Superbowl win on the line, it was a life.  A beautiful, precious, sacred life.  A life that mattered dearly to the one who lived it, and to the ones who called him family.

The skinny, frightened, bruised and scarred pig was not ready to die, but the smells and sounds around him assured him that was the plan.  So, when the transport truck opened, he leapt and made a break for safety. The humans went after him, yelling scarily. He scrambled, dove, spun and ran for all he was worth. They were in hot pursuit, but somehow, Grace intervened.

Trembling, he hid under a pile of hay, exhausted and out of options. A silent plea rose from his trembling body. “Save me,” he beseeched mutely, “Please.”

And Grace, in its unfathomable majesty, responded.

An angel whose job was to save horses found him quivering in fear. She begged the “kill buyer” in whose custody the pig had fallen, to spare his life. He heard her, and took mercy. “I’ll tell you what,” he said, “I’ll give you a grace period.” She had 24 hours to find him sanctuary.

But now what was she to do? Angels who save horses don’t necessarily know where to bring lost pigs, and 24 hours is not a lot of time to find those places. And it was Superbowl Sunday evening.  Who on earth was even going to be around to answer the phone?

But Grace does not take time off for football, as it turns out. Grace works all the time. Outside of time.

On her first call, she got through to another angel, this one at Poplar Spring Animal Sanctuary. They were not able to take any more pigs, but the Poplar Spring angel was eager to help find this little pig safe haven.

She called more angels, from New York to Canada, and one by one, they joined in the search.  Soon, the little pig had a whole army of angels working on his behalf. Safe haven was found for him at Indraloka, where we all cried with joy at adding another beloved to our family. 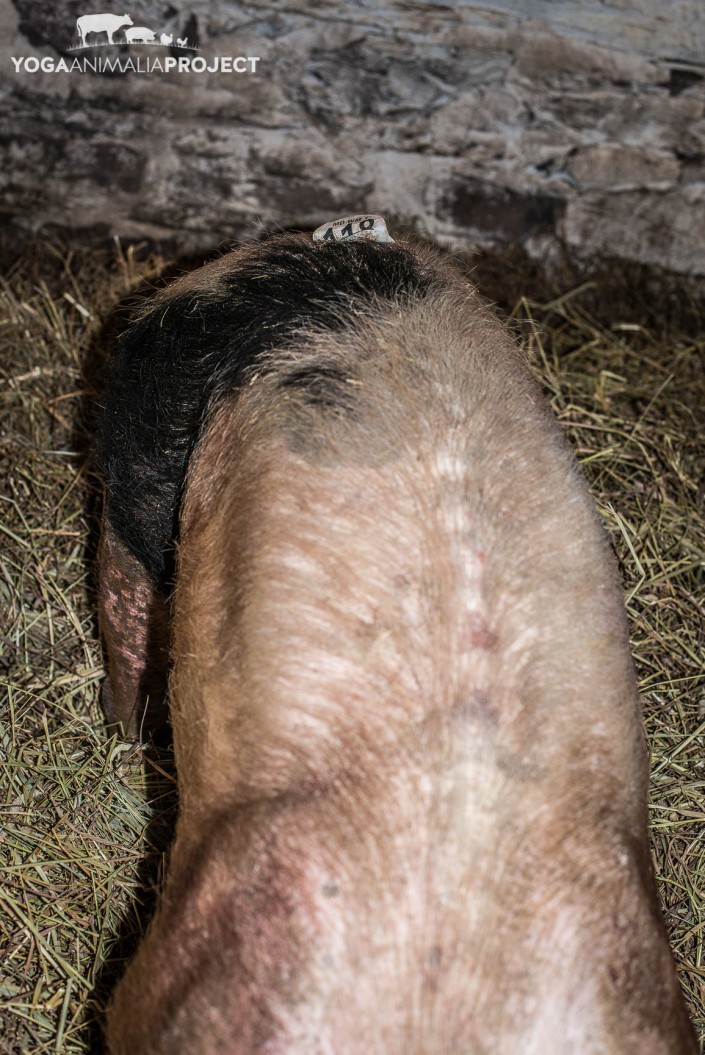 Finally, he arrived. Under the bruises and wounds, every bone was visible.  And yet, his eyes were filled with hope. I cried at the beauty of it– this pure, unadulterated Śraddhā .

Śraddhā is the intersection between faith and mindfulness.  To me, it embodies the notion that we need to take action for our own well-being, but also to remember that we are not acting alone—that there are strong forces of love that work with us and protect us even as we work on our own behalf.  So, Śraddhā is faith, hope, love, and action all in one.  And this pig, with his light-filled eyes, and his leap towards freedom, was the perfect example of this. How, I wondered, in tears again, had this pig managed to survive such brutality and still remain so beautifully pure and hopeful? The thought of it filled me with awe for this wise little soul. 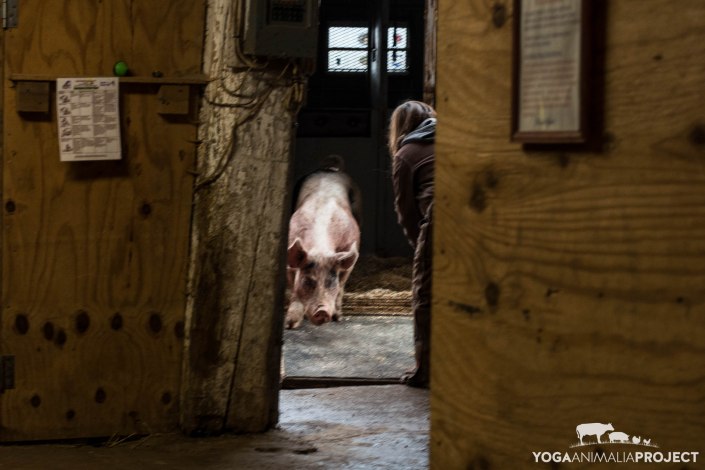 He leapt from the trailer and ran into his quarantine pen without hesitation, needing no guidance to find the right pen.  After drinking several gallons of water, he munched happily on a big, fresh salad and some sweet hay before greeting us, one by one, with a sniff and a smile. As I write, he is sleeping contentedly under a big pile of hay, snoring peacefully.

Dominic, we named him, and he is full of Grace. 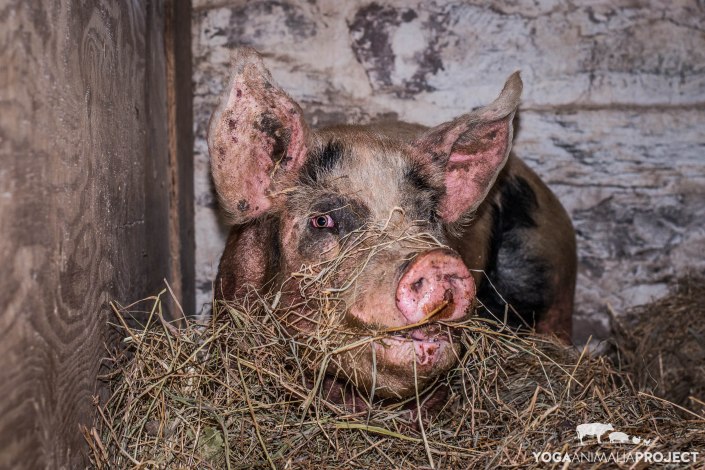 Many, many thanks to: all of you who make it possible to rescue and care for our beloveds, Kelly from Omega Horse Rescue, Terry from Poplar Spring Animal Sanctuary, Monica from Esther’s Army, the person who chose to spare his life, and to Cameron O’Steen from the Yoga Animalia Project for his beautiful photos, and to Grace.

indralokaanimalsanctuary responded:
February 8, 2017 at 1:30 am

We are blessed to do it.

I am beyond words of gratefulness to you. When I saw him I knew that we had to try. My heart is so full of happy tears. Thank you again.

You are truly and angel, Kelly. Thank you for not looking the other way. There is no way at all that he would have survived without your intervention.

This is so heart warming to see this it so wonderful there are still wonderful (angels ) out there to help save the poor scared abused animals.❤️💖

Agreed, Janet. It truly is wonderful that so many will band together and help someone as needy as Dominic was.

How bittersweet! My heart is filled with happiness to know this baby’s triumph to sanctuary but at the same time I am filled with extreme sadness and hurt to know of the others who couldn’t and who can’t be saved. Every so often a precious soul defies the odds and shines a much needed light on a such a brutal and cruel industry, that more people need to know about. Little by little I like to think we are changing the tide and changing minds. Thank you so much for your work♥

Yes, I agree. It is heartbreaking to consider the billions we have not yet saved. And yet, Dominic and his friends in sanctuaries around the world are the best ambassadors for change that we could ever ask for. Here’s to a compassion-filled future!

Reblogged this on AWARENESSHELPS.COM 👁 YOUR LINK TO HELP CHANGE THE WⓋRLD.

Reblogged this on "OUR WORLD".

What a wonderful tale and such a cute pig. Tweeted it on @bakeandwrite.

And Selick tapped the least likely pig to survive such a jump on the shoulder because he remembered what it was like to be in the darkness called fear. With his angel wings he tapped humans until this pig found himself at Indraloka. It is not a surprise that he knew right where to go after getting off of the truck and it is not a surprise that he smiles…..Selick paid it forward and now Dominic is there with his smile. Peace now Dominic. You will know love.

Thank you, Sue. I believe you are correct.

Thank you and everyone who was involved with saving this precious one.

It is truly a blessing to have such another wonderful being in our world. We love him.

SO beautiful. May all beings know love like this.

Yes. May all beings know love like this. Thank you.

Angels watching over him and fighting for him ❤

Yes. As they watch over all of us when we take action for ourselves with faith and love.

Welcome home, Dominic! Thank you all for saving this sweet pig. Thank you, Indra, for your beautiful words; and Cameron, for your beautiful pictures. And mostly, thank you Dominic for allowing us to experience your hope, trust, love and resilience. We will protect and love you.

Thank you, Lisa. We truly could not have saved him without you.

Thank you for all that you do!!!

It is an honor and a blessing! 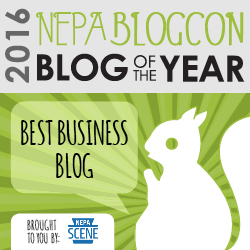 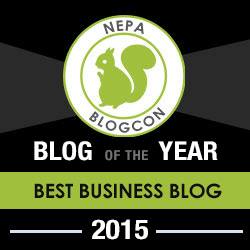 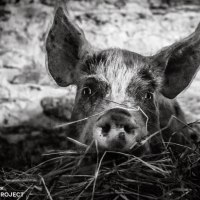 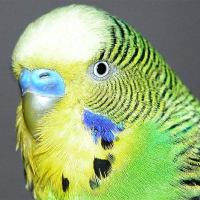 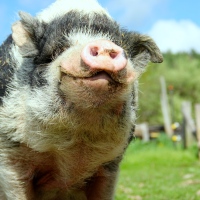 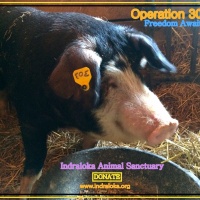 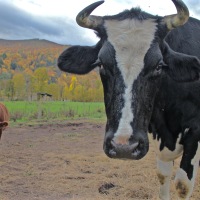 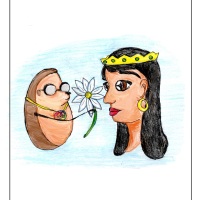 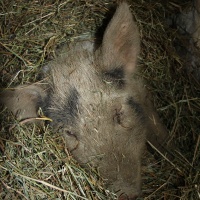 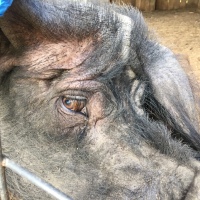